At the recent Ignite 2015 sessions Microsoft officially announced System Center 2016 and Windows Server 2016 new features. Of course, this is not complete list of all features that will be added to WS 2016 RTM. Anyway, we now can say MS has done great work. Here are the some major new improvements. 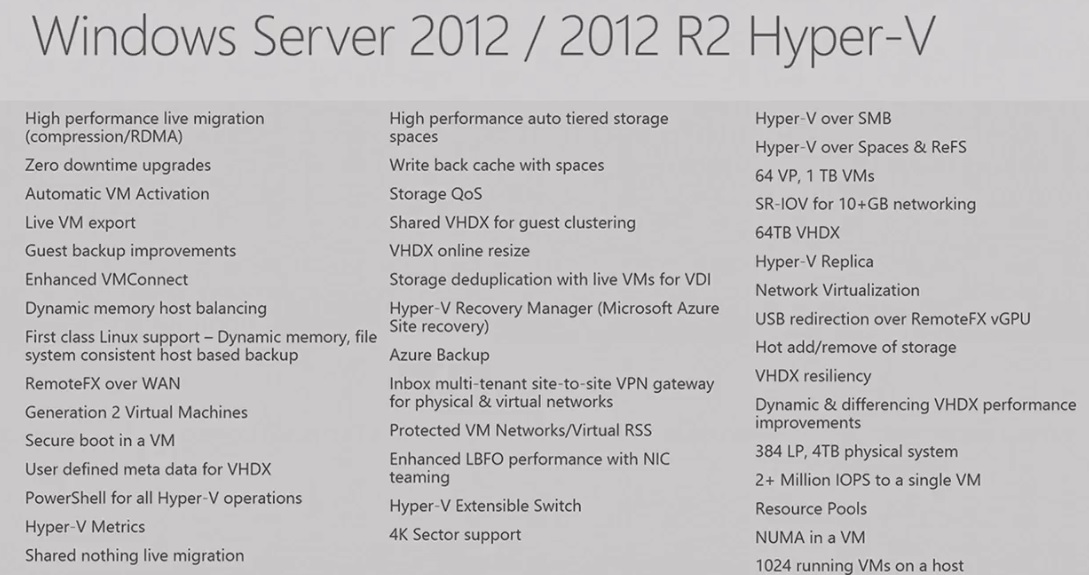 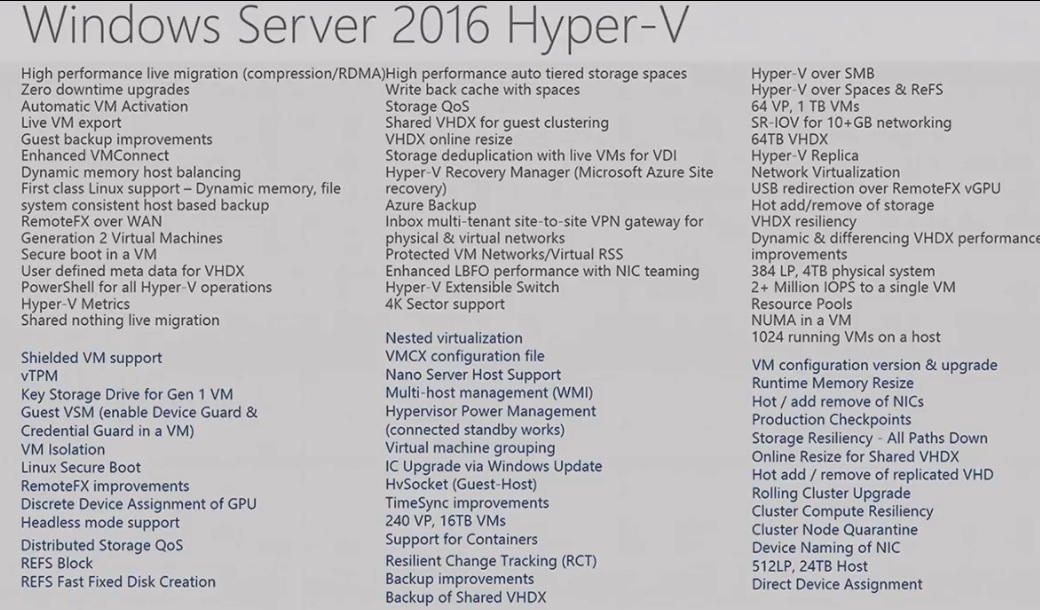 You can now upgrade your existing Server 2012 R2 Hyper-V cluster to Server 2016 without downtime. Cluster can operate with a mix of OS and you have downgrade options until you update cluster functional level. Once you update the cluster functional level to Server 2016 you don’t have any way to turn back it to 2012 R2. See my post for more information:  Step-By-Step: Cluster OS Rolling Upgrade in Windows Server Technical Preview

To update configuration version (for TP4. In TP5 cmdlet has been changed to “Update-VMVersion”):

In Windows Server 2012 R2 there is a similar feature called “SR-IOV” basically uses to pass-through network adapters to guest. In Windows Server 2016 TP4 Microsoft announced “Discrete Device Assignment” that allows you to take some of officially (list will be available later) supported PCI Express devices and  present them to VMs (it’s recommended to use only DDA supported devices in production)

DDA is based on SR-IOV technology as well. The main benefit of DDA is faster access to device from guest that may be needed in some scenarios where performance is critical.

Windows Server 2016 will allow NVMe devices and GPUs (graphics processors) to be assigned to guest VMs. Other devices such as USB/RAID/SAS controllers may work with DDA and some of them have been tested by Microsoft but we need to wait official support confirmation.

Host DDA requirements are similar to the SR-IOV virtualization:

For detailed information use the following links:

It was and is not supported to edit XML configuration files (but everyone does). Bad news for someone – VMCX/VMRS are binary.

Secure Boot is a feature that helps prevent unauthorized firmware, operating systems, or UEFI drivers (also known as option ROMs) from running at boot time. Secure boot is enabled by default. Finally, Linux operating systems running on generation 2 virtual machines can now boot with the secure boot option enabled.  Ubuntu 14.04 and later, and SUSE Linux Enterprise Server 12, are enabled for secure boot on hosts running Windows Server 2016 TP. Before you boot the virtual machine for the first time, you must specify that the virtual machine should use the Microsoft UEFI Certificate Authority. To enable Secure Boot use PowerShell:

Backup vendor partners had to go out and write their own kernel mode filesystem filters in order to do block change tracking because WS2012/R2 have no such capability in the platform. Change tracking has been added to Windows Server 2016 and now backup solutions can utilize all it’s features without writing additional filters. So built-in change tracking helps to get a more efficient and reliable way of backing up Hyper-V environment.

In the previous Windows Server versions we have the following switch types: Private, Internal and External. The things are changing.

Latest Windows Server 2016 and Windows 10 builds bring to us new switch type – NAT.  NAT switch was used in Containers as well (In TP3 you needs to configure Containers Host using the script New-ContainerHost.ps1 that creates NAT Switch by default). NAT Switch allows Virtual Machines that are located in internal subnet to have an external access through NAT (Network Access Translation).

Because of there are no any options in GUI you have to use powershell to create and manage Hyper-V NAT Switch.

UPDATE: in Windows Server 2016 Technical Preview 5 and RTM the “NAT” VM Switch Type has been removed to resolve layering violation.But it can be still done by using the following operations:

More info: What Happened to the “NAT” VMSwitch?

Hot add and remove for network adapters and static memory

You can now add or remove a Network Adapter while the virtual machine is running, without incurring downtime. This works for generation 2 virtual machines running both Windows and Linux operating systems.

Hot add and remove network adapter to all running VMs (Degraded status for SQL_01 and VMM VMs is because of integration services. I have not upgraded IS yet on these VMs)

The huge update to Hyper-V related services – Storage Spaces In the  previous Windows Server there are some ways to provide shared storage to hyper-v cluster: SMB, iSCSI, FC, Storage Spaces with JBOD (just bunch of disks) . I had a lot of customers who wanted just use their local storage and share it between hosts. With 3d part software (Starwind, for example) it’s possible with at least 2 nodes. Now you have another option : Storage Spaces Direct (S2D). S2D provides ability to create shared storage with internal disks as shown on the picture below. To evaluate Storage Spaces Direct in Windows Server, the simplest deployment is to use at least four (!) generation 2 Hyper-V virtual machines with at least two data disks per virtual machine. MS has done great improvement in their own SDS (Software Defined Storage).

Update: S2D in 2016 RTM  requires from 2 to 16 servers with local-attached SATA, SAS, or NVMe drives. Each server must have at least 2 solid-state drives, and at least 4 additional drives. The SATA and SAS devices should be behind a host-bus adapter (HBA) and SAS expander.

I had a customer who wanted to create a stretched cluster between 2 sites with existing IBM SANs. There were some ways to achieve it : buy additional licenses to SANs (from IBM world : remote copy and flash copy) or upgrade to higher model with advanced features on board. The cost of that solution was surprisingly high.

But now you have alternative from MS. New feature is called Storage Replica. It allows you to create replica between hyper-v standalone hosts or between clusters (including site-to-site). Storage Replica is hardware agnostic , provides more effective solution for DR (Disaster Recovery), use SMB3 for transport and supports both Synchronous/Asynchronous types or replication!

Changes in Storage Quality of Service

It works great on stand alone Hyper-V hosts but If you have cluster with a lot of virtual machines or even tenants It can be complicated to achieve right QoS for all cluster resources.

Storage QoS in the upcoming Windows Server 2016 provides a way to centrally monitor and manage storage performance for virtual machines. The feature automatically improves storage resource fairness between multiple virtual machines using the same file server cluster. In other words , QoS for Storage will be distributed between group of virtual machines and virtual hard disks.

One of my favorite new feature (yes..it’s not Hyper-V itself. it’s a new cool feature in WSFC…but who is using Hyper-V without cluster? :))

If you have highly available VM and host becomes unresponsive host goes into isolation mode for 4 minutes  (by default) but all VMs on this host will be running during this period. If host becomes responsive in this time frame (4 minute) isolation mode goes away and node operates normally. In case when host switches quite often between normal and isolation modes – this host marks as quarantined and all VMs migrate to the another (healthy) node in cluster.

Note: In Windows Server 2012 R2 we have only automatic failover of VMs if host becomes unresponsive

Hyper-V Replica was announced in Windows Server 2012 and was updated in 2012 R2.There was disgusting restriction (personally for me) : you cannot hot add or remove newly added VHDX to VMs to existing Replica. In this case, there is the only 1 option for you: reconfigure replication. Bad way..

In Windows Server 2016 Hyper-V Replica allows you to add new VHDX without any panic.  When you add a new virtual hard disk to a virtual machine that is being replicated – it is automatically added to the non-replicated set. This set you can update online through PowerShell:

This feature has come from Azure. Now Hyper-V can automatically detect Virtual Machines which are attacking fabric (trying to overhead virtual resources) and reduce resource allocation to “bad” VMs

It is  enabled by default in Windows Server 2016 and provides ability to create snapshots through VSS instead of Saved State. You can switch between production and standard checkpoints

The most awaited feature from fist time when first Hyper-V version was released. Ability to run VMs inside VMs was required by developers, MVPs, MCTs and other people (nowadays we use VMware for nested). And now Microsoft officially announced that nested virtualization will be a part of Windows Server 2016. Here is user voice thread and answer from MS: http://windowsserver.uservoice.com/forums/295050-virtualization/suggestions/7955529-nested-hypervisor

Windows Server 2016 Hyper-V allows you encrypt your VMs using Windows Server BitLocker (through Virtual Trusted Platform Module chip added inside VM). Another great feature to get the most securest cloud infrastructure. Customers can secure their VMs by BitLocker and don’t be afraid about privacy.

Now you can manage and execute PowerShell inside guest’s OS remotely (from parent host) through VMBus .

In Windows Server 2012 R2, the RemoteFX video adapter has a limitation of 256MB for the maximum amount of dedicated VRAM it exposed, OpenGL 1.1 (!!) and no support for OpenCL.

In real world RemoteFX in 2012 R2 is not suitable for modern applications whether it’s Autocad Re-Cap (OpenGL 3.3, 1Gb VRAM is required) or Photoshop (CC requires OpenGL 2.0 and 512 MB VRAM at least).

Microsoft has got that there is no time to lose and has updated RemoteFX adapter with some VRAM new capabilities which can brake some limiting factors:

These settings can be configured by PowerShell:

RemoteFX can be used in new personal session desktops as well. Please check out my post What’s new in RDS Windows Server 2016?

There is no option to install Windows Server with full GUI.

..(with local  admin tools) is equal to Windows Server with minshell (servermanager..)

Here is a user voice (please vote or post your thoughts! MS checks this!) to turn back an option with GUI

Update: Microsoft added GUI back . Your voices have been heard. Since TP3 release you have ability to install Windows Server with full GUI (more than just local admin tools in TP1/TP2) 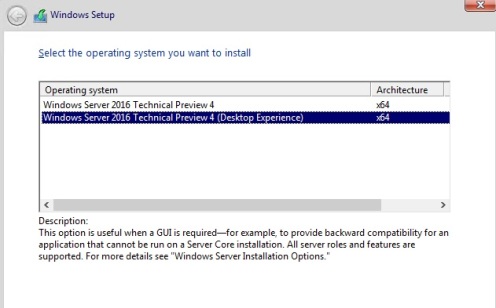 UPD: Nano Server has been updated in TP4 . Now you can install IIS and DNS server roles in addition to Hyper-V and Scale-Out (in cluster or not)

UPD: Docker commercial engine is available at Windows Server 2016 without any additional charge!

Previously, it was requirement only to Hyper-V on client OS (Windows 8/8.1).

Connected standby has multiple benefits to the user over the experience that traditional ACPI Sleep (S3) and Hibernate (S4) states deliver. The most prominent benefit is instant resume from sleep. Connected standby PCs resume extremely quickly—typically, in less than 500 milliseconds. The performance of a resume from connected standby is almost always faster than resuming from the traditional Sleep (S3) state and significantly faster than resuming from the Hibernate (S4) or Shutdown (S5) state.

When the Hyper-V role is enabled on a computer that uses the Always On/Always Connected (AOAC) power model (Surface Pro 3, for example), the Connected Standby power state is now available and works as expected.

How can you improve the next version of Windows Server?